As observed by NASA’s Chandra X-ray Observatory, the Abell S1063 galaxy cluster is incredibly bright in high-energy X-ray light1. When neighboring galaxies or clusters of galaxies merge due to gravity, the infalling gases collide. The resulting shock heats the gas, which then emits high-energy X-ray light. The Abell S1063 galaxy cluster’s X-ray brightness is one of the clues that suggests we may actually be observing a major event involving the merging of multiple galaxy clusters. 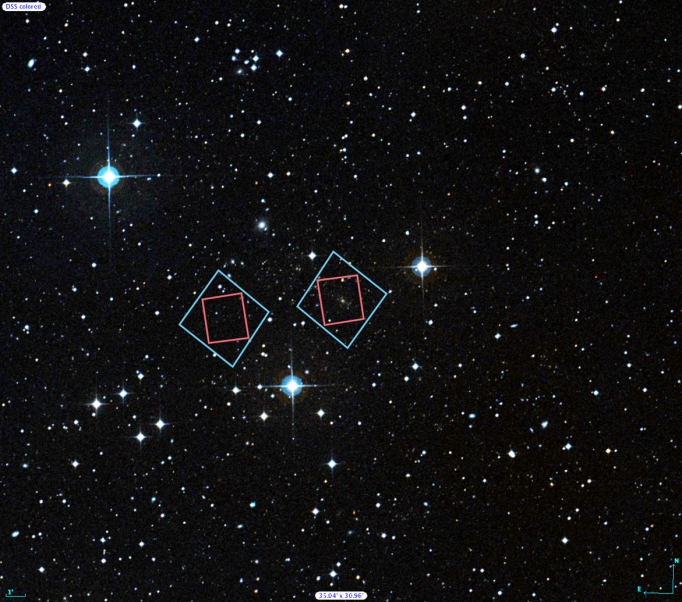 The locations of Hubble’s observations of the Abell S1063 galaxy cluster (right) and the adjacent parallel field (left) are plotted over a Digitized Sky Survey (DSS) image. The blue boxes outline the regions of Hubble’s visible-light observations, and the red boxes indicate areas of Hubble’s infrared-light observations. A scale bar in the lower left corner of the image indicates the size of the image on the sky. The scale bar corresponds to approximately 1/30th the apparent width of the full moon as seen from Earth. Astronomers refer to this unit of measurement as one arcminute, denoted as 1′.
Credit: Digitized Sky Survey (STScI/NASA) and Z. Levay (STScI).

The planned dates for Hubble observations of the Frontier Fields include observations approximately six months apart. This is the time it takes for the cameras on Hubble to swap positions so that both visible-light data and infrared-light data can be captured from the galaxy cluster field and the adjacent parallel field, as described in this post.

Redshift measures the lengthening of a light wave from an object that is moving away from an observer. For example, when a galaxy is traveling away from Earth, its observed wavelength shifts toward the red end of the electromagnetic spectrum. The galaxy cluster’s cosmological redshift refers to a lengthening of a light wave caused by the expansion of the universe. Light waves emitted by a galaxy cluster stretch as they travel through the expanding universe. The greater the redshift, the farther the light has traveled to reach us.

1: X-ray and Optical Observations of the Merging Cluster Abell S1063