NASA’s Frontier Fields program has reached a critical point.  The observations by NASA’s Great Observatories (Hubble, Spitzer, and Chandra) are nearing completion, and the full data are nearly all online for astronomers (or anybody else for that matter) to study.  To herald this part of the program, the Frontier Fields were highlighted at the January American Astronomical Society (AAS) meeting in Grapevine, Texas, where over 2,500 astronomers gathered to discuss the cosmos.  A new exhibit was displayed to help tell the story of the Frontier Fields program to the science community.  We share that story with you below.

NASA’s Great Observatories Team Up to View the Distant Universe

The Frontier Fields is a program developed collaboratively by the astronomical community.  Despite the fact that observations are coming to an end, the wealth of data being added to NASA archives will ensure new discoveries for years to come.

A Sneak Peek at the First Billion Years of the Universe: Galaxy cluster fields extend the reach of the Great Observatories by allowing astronomers to use a technique called gravitational lensing, which magnifies background galaxies that are otherwise presently unobservable.

The observing plan of the NASA Frontier Fields program, using the galaxy cluster Abell 2744 and its adjacent parallel field as an example. Director’s Discretionary (DD) hours were allocated for Hubble and Spitzer observations. DD time comes directly from an observatory’s director, who has a set number of hours to allocate every year.

By using Hubble, Spitzer, and Chandra to study these deep fields in different wavelengths of light, astronomers can learn a great deal about the physics of galaxy clusters, galaxy evolution, and other phenomena related to deep-field studies. Observations with Hubble provide detailed information on galaxy structure and can detect some of the faintest, most distant galaxies ever observed via gravitational lensing.  Spitzer observations help astronomers characterize the galaxies in the image, providing details on star formation and mass, for example.  High-energy Chandra X-ray images probe the histories of the giant galaxy clusters by locating regions of gas heated by the collisions of smaller galaxy sub-clusters.

An example of images taken by Hubble, Spitzer, and Chandra of the Frontier Fields galaxy cluster Abell 2744 are shown below.  These images show how astronomers can use color to highlight the type of light observed by each of NASA’s Great Observatories. 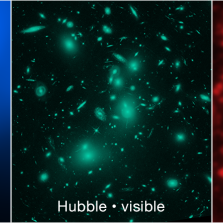 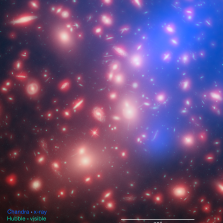 Developing Mathematical Models of the Clusters

By discovering background galaxies that are obviously multiply lensed, and measuring their distances, astronomers can use Einstein’s theory of general relativity to map out the distribution of mass (normal matter plus dark matter) for the galaxy cluster.

Mathematical models of the mass distribution of a galaxy cluster provide magnification maps that pinpoint the locations of greatest magnification due to gravitational lensing. These are where astronomers search for the most distant and faintest galaxies. Shown here are Hubble imagery of galaxy cluster Abell 2744 (green); distribution of mass for the Abell 2744 galaxy cluster (blue); and locations of greatest lensing for background galaxies with a redshift of 9 (pink). There are different magnification maps for background galaxies at different distances. Credit: J. Richard (CRAL Lyon), CATS team, and D. Coe (STScI) 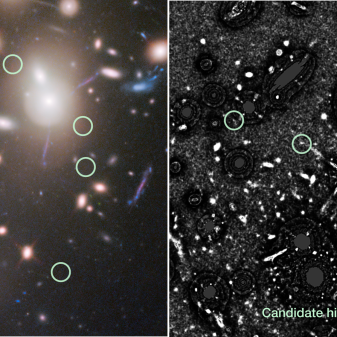 In the first few years of the program, over 85 refereed publications and 4 conferences have been devoted to or based, in part, on the Frontier Fields, including a workshop at Yale in 2014 and a meeting in Hawaii in 2015.  Three types of science results are highlighted below. 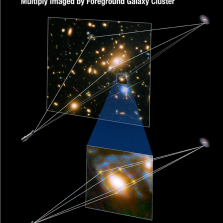 Frontier Fields observations by NASA’s Great Observatories, along with additional ground-based observations, are building our understanding of the physics of massive galaxy-cluster mergers.

By studying Hubble Space Telescope deep imaging at the locations where gravitational lensing magnifications are predicted to be high, astronomers are detecting galaxies that are up to 100 times fainter* than those observed in the famous Hubble Ultra Deep Field. Infrared observations by the Spitzer Space Telescope enable astronomers to better understand the masses, and other characteristics, of background lensed galaxies and those residing within a massive galaxy cluster.

Looking to the Future

Shown here are simulated Spitzer (left) and JWST (right) images of distant galaxies in infrared colors. These were constructed from a computer simulation of the deep universe. Credit: G. Snyder & Z. Levay (STScI)

JWST will build upon the success of Spitzer’s observations of the infrared universe with enhanced clarity and sensitivity, probing deeper into the universe than ever before.  Due to the expansion of the universe, light from the most distant galaxies are shifted to redder wavelengths, moving beyond the visible spectrum and into infrared light.  One of JWST’s primary science goals is to observe these infant galaxies at the edge of the observable universe.

Imagine having a Hubble-class telescope that can observe in the infrared and see greater than an order of magnitude more of the sky with each observation.  WFIRST’s expansive field-of-view – 100 times wider than Hubble’s – will allow for new ground-breaking surveys of the deep universe.