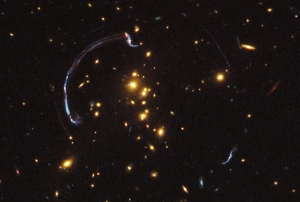 One of the coolest marvels in the universe is a phenomenon known as “gravitational lensing.” Unlike many topics in astronomy, the images are not what makes it appealing. Gravitational lensing produces streaks, arcs, and other distorted views that are intriguing, but don’t qualify for cosmic beauty pageants. What makes these images special is the intellectual understanding of how they are created, and the fact that they are even possible at all. The back story takes an ordinary, everyday process, and transforms it into cosmic proportions.

Most of us are familiar with the workings of a glass lens. If you have ever used a magnifying glass, you have seen how it changes the view of an object seen through it.

The glass lens collects light across its surface, which is generally much larger than the pupil of a human eye. Hence, a lens can amplify brightness. In addition, the path of a light ray is bent when it passes through the glass lens. [To be specific, the path bends when the light crosses from air to glass, and again when it crosses back from glass to air.] This bending is called refraction, and the common lens shape will focus the light to a point. When we view that collected light, our view of the object can be bigger or smaller depending on the distances involved, both from the object to the lens and from the lens to our eyes. In summary, a glass lens can amplify and magnify the light from an object.

Glass lenses, however, are not the only way that the path of light can be changed. Another way to redirect light comes from Einstein’s theory of general relativity.

My three-word summary of general relativity is “mass warps space.” The presence of a massive object, like a star, warps the space around it. When light crosses through warped space, it will change its direction. The result is that light that passes close enough to a massive object will be deflected. This deflection by mass is similar to refraction by glass.

Clusters of galaxies are huge concentrations of mass, including both the normal matter we see in the visible light from galaxies and the unseen dark matter spread throughout. Many galaxy clusters are massive enough to produce noticeable deflections of the light passing through or near them. The combined gravity in the cluster can warp space to act like a lens that gathers, amplifies, and magnifies light. Such a gravitational lens will be lumpy, not smooth, and will generally create distorted images of background galaxies seen through them. Also, this lensing often produces multiple images of the same background galaxy, as light from that galaxy is re-directed toward us along multiple paths through the cluster.

The simple idea of a glass lens becomes both cosmic and complex in gravitational lensing. Imagine a lens stretching millions of light-years across (many million million millions of miles). We don’t need to construct such a lens, as nature has provided a good number of them through the warping of the fabric of space. These lenses allow us to see very distant galaxies in the universe, some of which could not otherwise be observed. That’s the marvelous reality of galaxy clusters acting as gravitational lenses.

9 thoughts on “The Marvel of Gravitational Lensing”