Galaxy cluster Abell 2744, the first of the Frontier Fields to be imaged.

Take a long look at this image. You’re seeing a lot of distant galaxies magnified by the natural “gravitational lens” of galaxy cluster Abell 2744. But you aren’t seeing as many as you think.

Gravitational lenses, natural magnifiers created in space when light is bent by the enormous mass of galaxy clusters, distort and enlarge the images of distant galaxies behind the cluster. But they do more than that: sometimes they replicate them, like multiple images in a funhouse mirror.

In the above image, we’ve marked the galaxies that are actually images of the same galaxy by overlaying them with numbered triangles. Each galaxy has a number. The multiple images are identified by letters. The galaxies labeled 1a, 1b, and 1 c, for instance, are one galaxy, its image repeated three times. (Only numbers and letters are significant. The colors don’t represent anything, but are used to make it easier to distinguish the various numbered galaxies.)

In previous posts, we explained that mass distorts space. Light from a distant galaxy follows space’s curve like a ball rolling along a putting green. (Think of space as a miniature golf course with fewer animatronic dinosaurs.)

Sometimes, the level of distortion sends the light to multiple places. If you’ve ever seen a single candle reflected multiple times in the bottom of a wineglass, you’ve seen this distorting effect occur in lenses. In fact, gravitational lensing is so similar to glass lensing that you could replicate the distortions of a gravitational lens by grinding a glass lens to the same proportions and bumps.

And cosmic lenses are quite lumpy. The galaxies of the cluster, embedded in halos of dark matter, create bumps of mass. Light can take multiple paths around the galaxy cluster as it encounters the distortions in space-time created by the cluster’s mass. The closer the light of more-distant galaxies passes to the lens, the stronger the deflection. If the light passes close enough to the lens, these multiple images are likely to appear. The individual galaxies in the cluster also add small deflections, and occasionally help produce multiple paths for the light to reach us.

When astronomers look at a lensed image, they’re looking at a giant puzzle. They need to figure out where all the mass is in the image – most of it, being dark matter, is invisible. Pinpointing the multiple images of identical galaxies helps accomplish this because they’re a good indicator of how dramatically the light is being deflected. 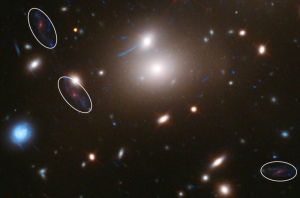 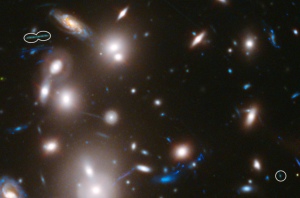 Some of the multiple images are obvious. Galaxy images 1a, 1b and 1c (left image) are good examples – they’re blue galaxies with red centers, and they look very like one another. The green-hued galaxy identified by 3a, 3b and 3c (right image) is another good example. Astronomers seek out those obvious candidates to start with, then try to build a model of how the mass in the cluster is distributed. Based on that model, they start identifying the multiple images that aren’t so obvious: Does this reddish galaxy to the side have a counterpart where the model says it should be? Analysis of attributes like color, and especially distance, also play an important role in determining which galaxies are multiples — a technique that comes in handy in many situations.

Thanks to reader Judy Schmidt for the idea for this post.

11 thoughts on “Seeing Double (or More!) in Frontier Fields Images”

Join 259 other subscribers
This blog is a product of Space Telescope Science Institute, center of science operations for the Hubble Space Telescope.
Loading Comments...
%d bloggers like this: