This post is the second in a two-part series.

In my last post, “Hubble Observations: From the Sky to the Ground,” I wrote about the route Hubble images take as they are digitally transferred from space to the ground.

This is the story of what happens after that data makes the 30-mile trip over land-lines from NASA’s Goddard Space Flight Center in Greenbelt, Md., to the Space Telescope Science Institute in Baltimore, Md., and ultimately to your computer as iconic Hubble pictures.

Hubble generates approximately 855 gigabytes of new science data each month. That’s the equivalent of an 8,550-yard-long shelf of books. Astronomers, in turn, typically download six terabytes of data monthly from this growing archive. That would be the equivalent of the printed paper from 300,000 trees. By the beginning of April 2014, Hubble data had been used to publish more than 12,000 peer-reviewed scientific papers.

The raw Frontier Fields data are available to the public immediately from a repository called the Barbara A. Mikulski Archive for Space Telescopes, or MAST. However, these data are not the beautiful, color Hubble images we have come to know and love. Raw images from the telescope are black and white, and include distortions introduced by the instruments, as well other unwanted artifacts from Earthshine, occasional Earth-orbiting satellite trails, bad pixels, and random hits by small, charged particles called cosmic rays. 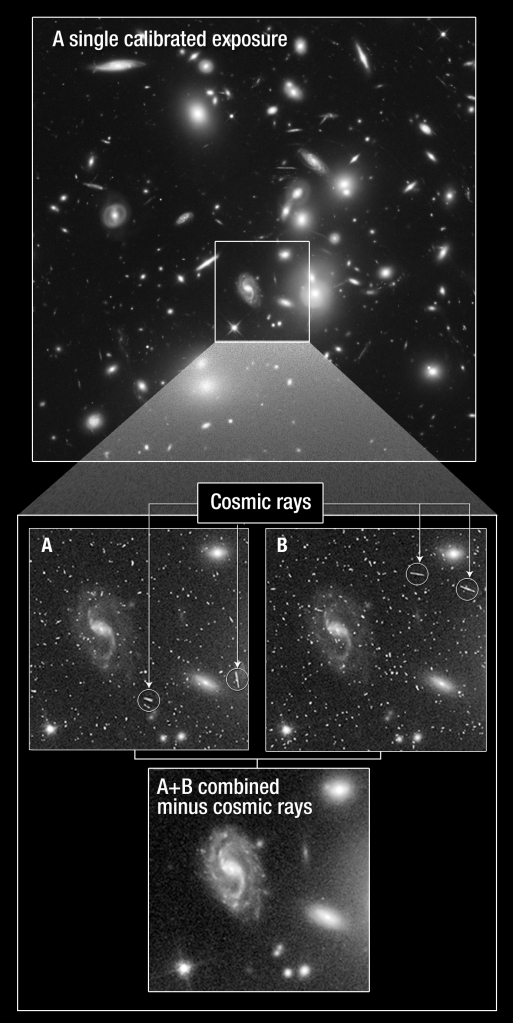 Cosmic ray signatures are removed by combining two exposures in a way that removes everything not in both images. Credit: NASA, ESA, and J. Lotz, M. Mountain, A. Koekemoer, the HFF Team, and Ann Feild (STScI).

It takes a team of about a dozen instrument analysts to “clean” these images by removing the distortions and artifacts. The refined images are posted once a week on MAST. These are the combination of multiple exposures taken in seven different filters, which allow light at specific wavelengths to enter the instruments.

Hubble’s instruments have many filters. The Frontier Fields observations use four in infrared from the Wide Field Camera 3 (WFC3), and three in visible light from the Advanced Camera for Surveys (ACS). The final, deep, combined color image for each Frontier Field will have a total of 560 exposures, divided evenly between the main cluster and its parallel field. 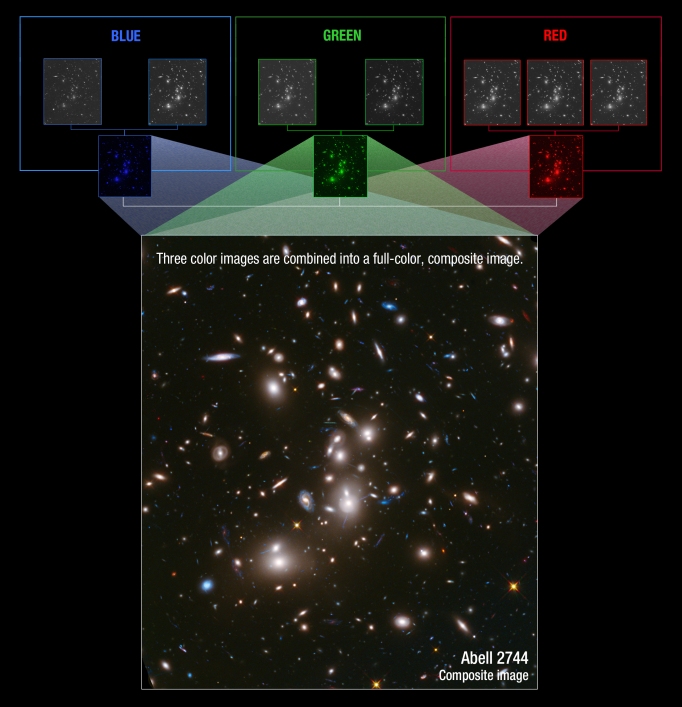 The top row shows the combined exposures through each of the seven filters as single images. To produce the color pictures, exposures from several selected filters from Hubble’s WFC3 and ACS were combined into one of three primary colors based on their wavelengths. The primary color images were then composited to produce the full-color image. Credit: NASA, ESA, and J. Lotz, M. Mountain, A. Koekemoer, the HFF Team, and Ann Feild (STScI).

There is a Facebook page  for amateur astronomical image processors to exchange information, tips and techniques, and share their work.

9 thoughts on “Hubble Observations: From the Ground to Your Computer”

Leave a Reply to Hubble Observations: From the Sky to the Ground | Frontier Fields Cancel reply