This is the first in a three-part series.

Time on the Hubble Space Telescope is a precious commodity. As a space telescope, Hubble can observe 24 hours a day, but its advantageous perch also attracts a large number of astronomers who want to use it. The current oversubscription rate—the amount of time requested versus time awarded—is six to one.

The process of observing with Hubble begins with the annual Call for Proposals issued by the Space Telescope Science Institute to the astronomical community. Astronomers worldwide are given approximately two months to submit a Phase I proposal that makes a scientific case for using the telescope. Scientists typically request the amount of telescope time they desire in orbits. It takes 96 minutes for the telescope to make one trip around the Earth, but because the Earth usually blocks the target for part of the orbit, typical observing time is only about 55 minutes per orbit.

Longer observations require a more compelling justification since only a limited number of orbits are available. Winning proposals must be well reasoned and address a significant astronomical question or issue. Potential users must also show that they can only accomplish their observations with Hubble ’s unique capabilities and cannot achieve similar results with a ground-based observatory.

The Institute assembles a time allocation committee (TAC), comprising experts from the astronomical community, to determine which proposals will receive observing time. The committee is subdivided into panels that review the proposals submitted within a particular astronomical category. Sample categories include stellar populations, solar system objects, and cosmology. The committee organizers take care to safeguard the process from conflicts of interest, as many of the panel members are likely to have submitted, or to be a co-investigator, on their own proposals.

Proposals are further identified as general observer (GO), which range in size from a single orbit to several hundred, or snapshot, which require only 45 minutes or less of telescope time. Snapshots are used to fill in gaps within Hubble ’s observing schedule that cannot be filled by general observer programs. Once the committee has reviewed the proposals and voted on them, it provides a recommended list to the Institute director for final approval.

In my next post, I will discuss how observations are planned.

In a previous blog post, “Einstein’s Crazy Idea“, I discussed how Einstein’ s theory of general relativity is a reinterpretation of gravity. Newton’s original idea of gravity visualized it as a force between massive objects. Einstein instead surmised that the presence of mass warps space, and that curved space-time produces the motions we attribute to gravity. Earth’s orbit around the Sun is either a curved path through flat space (Newton) or a straight path through curved space (Einstein).

Both ideas of gravity produce the same observed motions for most cases. But there are a number of situations, generally involving very strong gravitational effects, where general relativity explains phenomena that gravitational forces get slightly wrong. The differences are often subtle and take quite a lot of explanation to appreciate. However, one example is visually obvious: gravitational lensing. 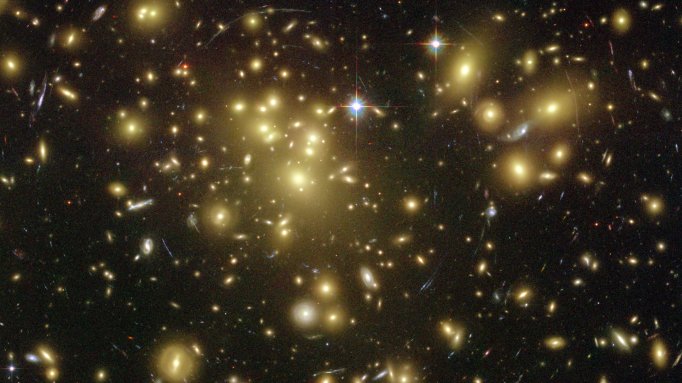 Hubble image of galaxy cluster Abell 1689, showing a large number of lensed arcs (click on the image for larger version). These arcs are distorted images of background galaxies, gravitationally lensed by the mass of the cluster.

The combined mass of the thousands of galaxies in the cluster (and their associated dark matter – a topic discussed in the What is Dark Matter? blog post) heavily distorts the space-time around the cluster. Light from more distant galaxies passes through that warped space. The images of those distant galaxies become distorted as if they were being seen through an odd-shaped glass lens. In fact, the physics of light redirection using gravity is entirely analogous to that using lenses. It is the optics of complex lenses, but using mass instead of glass.

For that reason, I like to say that pictures of gravitational lensing are visual “proof” of general relativity. You don’t have to delve into the astronomy, physics, or complex mathematics — just examine the image. Such distortions arise from general relativity.

Now, the visual distortions may be easy to spot, but that’s not to say that these images are easy to interpret. Just the opposite is true. I’ll provide some examples of the complexities of understanding gravitational lensing in my next blog post.