This is the second in a three-part series.

Researchers awarded telescope time based on the scientific merit of their Phase I proposal must submit a Phase II proposal that specifies the many details necessary for implementing and scheduling of the observations. These details include such items as precise target locations and the wavelengths of any filters required.

Once an observation has occurred, the data becomes part of the Hubble archive, where astronomers can access it over the Internet. Most data is marked as proprietary within the Institute computer systems for 12 months. This protocol allows observers time to analyze the data and publish their results. At the end of this proprietary-data-rights period, the data is made available to the rest of the astronomical community. (Most of the very large programs, such as Frontier Fields, have given up proprietary time as part of their proposal.) 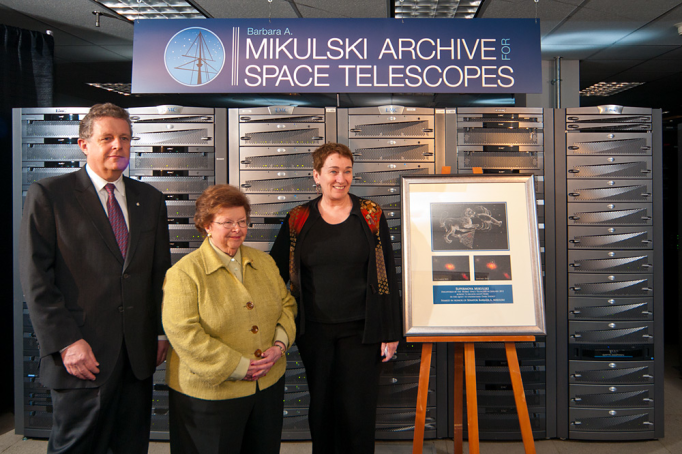 This is a view of the many computers that are part of the Barbara A. Mikulski Archive for Space Telescopes (MAST), located at the Space Telescope Science Institute (STScI) in Baltimore, Md. The archive is named in honor of the United States Senator from Maryland for her career-long achievements and becoming the longest-serving woman in U.S. Congressional history. MAST is NASA’s repository for all of its optical and ultraviolet-light observations, some of which date to the early 1970s. The archive holds data from 16 NASA telescopes, including current missions such as the Hubble Space Telescope and Kepler. Senator Mikulski is in the center, STScI Director Matt Mountain at her right, and STScI Deputy Director Kathryn Flanagan at her left. The plaque to image right is a photo of Supernova Milkuski, an exploding star that the Hubble Space Telescope spotted on Jan. 25, 2012. It was named in honor of the Senator by Nobel Laureate Adam Riess and the supernova search team with which he is currently working. The supernova, which lies 7.4 billion light-years away, is the titanic detonation of a star more than eight times as massive as our Sun.

Along with their Phase II proposal, observers can also apply for a financial grant to help them process and analyze the observations. These grant requests are reviewed by an independent financial review committee, which then makes recommendations to the Institute director for funding. Grant funds are also available for researchers who submit Phase I proposals to analyze non-proprietary Hubble data already archived. The financial committee evaluates these requests as well.

Up to 10 percent of Hubble ’s time is reserved as director’s discretionary time and is allocated by the Institute director. Astronomers can apply to use these orbits any time during the course of the year. Discretionary time is typically awarded for the study of unpredictable phenomena such as new supernovae or the appearance of a new comet. Historically, directors have allocated large percentages of this time to special programs that are too big to be approved for any one astronomy team. For example, the observations of the Frontier Fields use director’s discretionary time.

6 thoughts on “How Hubble Observations Are Planned”

Join 259 other subscribers
This blog is a product of Space Telescope Science Institute, center of science operations for the Hubble Space Telescope.
Loading Comments...
%d bloggers like this: